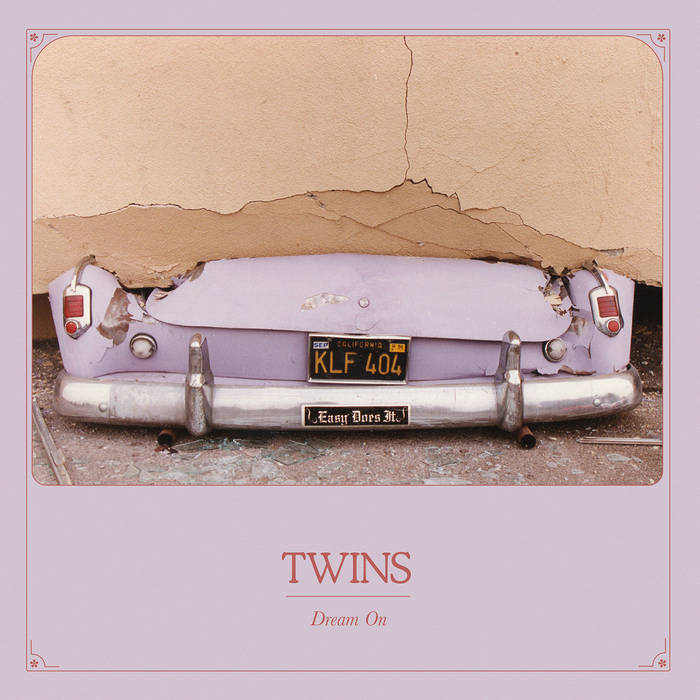 abfab333.robczy Super high quality, stellar work Gents!!! Thank you so much for a soundtrack to keep my sanity navigating this crazy world we’re living in.

Great stuff start to finish. Some really standout work! Buffalo Snow is transcendent - no doubt. Passenger - love the organ and the legacy TWINS backbeat spirit! In Your Dreams kills! So Far Gone, Straight River Sketch and Living Proof hit all the right spots delivering a record that is so fully realized.

So hope to see you soon! Be safe and well. Favorite track: Buffalo Snow.

From the onset, it’s immediately apparent that the band’s new release, Dream On, dials back most of the blistering power pop and in-your-face rock & roll yearnings of teenage love (and lust) from TWINS’ back catalogue.

Sonically, the hooks are still there. They’re just more subtle — rewarding the listener over time as they reveal themselves throughout the 34-and-a-half minutes of Dream On’s slow burn. Songwriter and bandleader Joel Sires’ voice and acoustic guitar are at the forefront of the record.

Ben Rendall is a welcome addition to TWINS as he expands the band’s palette with his piano work, and Toby Sires provides an abundance of tasteful lead guitar licks that meld with each track like a chameleon. The occasional mandolin and some ace slide guitar on album opener The Laws of Love further round out the band’s sound. And the record continues to be rooted in the foundation of the heartbeat-steady rhythm section of founding members Luke Sires on drums and Devin Ferguson on bass. All work in tandem throughout the record to complement Sires’ introspective tales — with each element put in context of Sires’ words and presence more than ever before.

“To me, the world is just so noisy and in your face, that this time around I just turned from that and went inward. Dialed back the sound. I also tried to put more of my honest self into the words,” said Joel.

Joel Sires worked alongside Seth Luloff (Holy White Hounds) to produce Dream On and meticulously record the sound of the band at a crossroads. It was all aptly captured in an old store front in an Iowa ghost town.

Thematically, Dream On doesn’t deal in black and white. TWINS capture moments of pure love and joy — but they also allow darker, bleak moments to creep through in the next breath. It’s a contemplative outing that doesn’t take itself too seriously. You might say it’s an existential record. It’s certainly honest, and it’s comfortable in its own skin.

This is perhaps best showcased on the record’s lead single and centerpiece, Buffalo Snow. Rather than spinning some fictional fantasy of a sunny California beach as an escape from Joel's isolated Iowa acreage, he instead goes with what he knows — he paints a picture of a brooding, snow-covered cityscape in which the airports can’t function due to the weather, and the roads are covered in the dark smoke of city buses.

Yet even in this scarily realistic space that TWINS create, there’s still a place for love … the kind of love you find on a grown-up rock record:

“Well I just wanna be a vapor trail, following behind you like a tail,” and “I just wanna be a shooting star, one that’s gonna find you in the dark. And if I could be a mirror, then I’d show you everything I see.”

There are certainly outside influences that helped inform the direction TWINS moved in for Dream On. Joel has a Spotify playlist that he built over the course of the creation of the record to capture what the band was listening to — sprinkled with bands like The Grateful Dead, Wilco, Kris Kristofferson, Bruce Springsteen, Townes Van Zandt, Lucinda Williams, Simon & Garfunkel, Gordon Lightfoot and Bob Dylan.
And like any well grounded Midwesterner, he includes the likes of Greg Brown and The Poison Control Center. Joel is even quick to credit another fellow Iowa band with showing TWINS a way to function as a mature rock band that can gracefully carry itself into the future. He cites longtime Des Moines band Brother Trucker as a big inspiration:

“Brother Trucker had a big impact on this new record. I had a huge epiphany watching those guys. I was wondering, ‘how do you get older with dignity and still be in a working band?’ And then I saw those guys, and it really changed me musically and emotionally.”

All Songs Written by Joel Sires