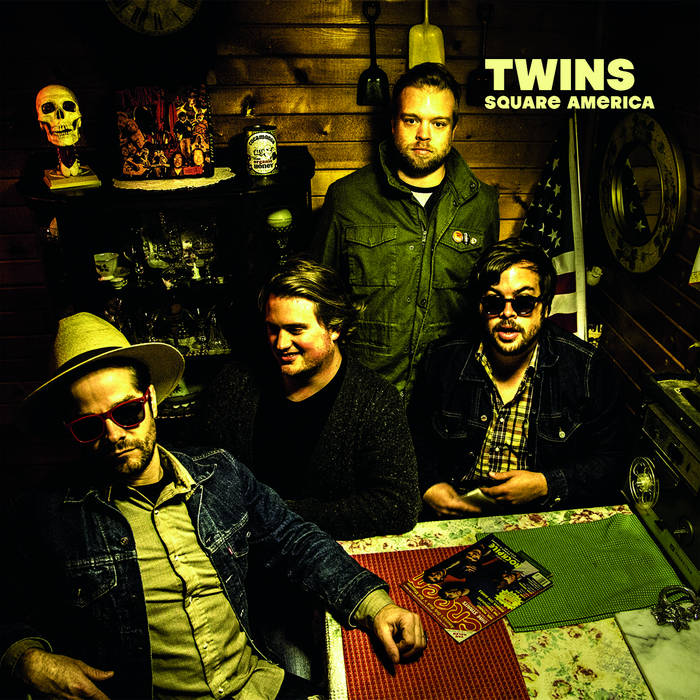 Waterloo, IA — April 25, 2016 — There’s no way around it: The road to create TWINS’ third LP, Square America, was a rocky one. It’s a small miracle it was ever completed.

TWINS scrapped an entire album it had recorded at a Chicago studio — they even threw the master tapes onto the tracks of The L for good measure. A discarded record, a divorce, a near death in the family (three of the four members carry the surname, Sires) and a few deep depressions later, TWINS was in a dark place.

And then there was the question: In a world full of the reverb drenched, cotton ball sound of today's indie mainstream, is it even COOL to make a rock & roll record anymore?

TWINS realized that the answer is actually an emphatic, “NO” … but they’re OK with that. In fact, they embrace it. This isn’t a band that is trying to be cool — or even IS cool.

The primary stroke of luck that helped guide TWINS through its dark times to make this album was teaming with its rock & roll soulmates, producer Patrick Tape Fleming (Gloom Balloon, The Poison Control Center) and engineer Matt Sepanic (Slipknot). They instantly clicked and understood the kind of sound the band intended to capture.

From the bombastic, over-the-top opener, "Hot Stepper" to the blistering, sing-along closer, "Teenage Grenade" — and everything in between — TWINS’ brand of rock & roll oozes with all the swagger, hooks and wild abandon a music fan could ask for. The songs were written on the road and were meant to be played on the road. Square America is tighter and louder than anything the band has done before. The album was basically a live set captured at the Sonic Factory Recording Studio in Des Moines, Iowa. Overdubs were minimal.

Square America HAD to happen — it gave TWINS the chance to stretch out, add some surprising new elements to its sound (pedal steel guitar and saxophone, anyone?) and shake off any and all expectations. What are expectations worth if you’re not even concerned with being cool?

Something this square might actually be what we need to SAVE ROCK & ROLL. Regardless, that’s the mission with which TWINS has charged itself. And it couldn't come at a better time.

For more information and a complete list of TWINS tour dates, visit TWINSTHEBAND.com.

TWINS' Square America LP will be available via maximumames.com, iTunes and all other digital platforms.